You have probably seen the video of Deshaun Watson giving his game check to 3 workers in the Houston Texans’ cafeteria who lost much in Hurricane Harvey.  At age 22, he is the starting QB.  His is the top-selling rookie jersey.  But he didn’t win his first trip to the college national championship.  He didn’t win the Heisman Trophy (the first time or the second time that he was nominated).  He wasn’t drafted first to the NFL.  During an interview with Brad Sham at the Dallas Habitat for Humanity Dream Builders event, he didn’t seem to care.  He was focused on the future and what he could accomplish.  He was grateful for his past – his Habitat for Humanity home, his coaches who mentored and pushed him, his mom, his college degree that he earned in 3 years.  In this world where it seems like the goal is to be first, the best, the brightest, to receive the gold star, the blue ribbon, the trophy, I appreciate the humility of a young man who takes his “losses” in stride, uses them as motivation for his next objective, demonstrates perseverance and resilience, remembers where he came from, and considers he has a larger purpose in life than just football yet positively utilizes his platform to make an impact.

Even old people like me can have “firsts.”  At this dinner, they were serving steak – a big, beautiful, juicy piece of red meat, except that I’ve stopped eating red meat for health reasons.  It’s such a bummer.  Some of my favorite recipes are beef: beef tenderloin sandwiches, prime rib and French dips, carne asada.  I asked for a vegetarian meal.  Hello?  That’s funny.  Me?  David, yes.  Me, no.  On the plate was this really good Israeli couscous with mushrooms.  I had to find a recipe and recreate it at home.  Ruth Reichl’s was my favorite.  Travis preferred this variation.  Either way, enjoy your first!

Add couscous to mushroom mixture, along with parsley and remaining 1 tablespoon butter, tossing to combine. Season with salt. Serve warm or at room temperature.

Email ThisBlogThis!Share to TwitterShare to FacebookShare to Pinterest
Labels: Mushroom, Pasta, Side 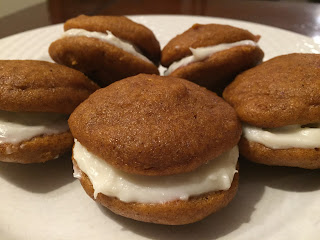 It seems as though the news is filled with nothing but negativity – anger, distrust, fear.  But I have seen kindness.  I have been the recipient of friends’ kindness – these friends who drove my kids at a moment’s notice or made a playlist of songs to remember my uncle or wrote a long, heartfelt, handwritten thank you note.  It reminds me not to allow the negativity to impact me; to make time for others; to show kindness because it does make a difference.

Elizabeth and I had some girl time and she asked to make some pumpkin bread.  Let’s make pumpkin cake instead (because that involves frosting)!  Oooohhh wait – David and I were at a fun party the other night and the Cousins Maine Lobster food truck (yep, we watch Shark Tank and yep, it was delicious and packed full of lobster meat (although I make a pretty good lobster roll too)) was serving whoopie pies.  Since TBM has already posted a classic whoopie pie, how about we make a pumpkin whoopie pie?  She was game so the research began.  This is the one that made us say “whoopie!!”

Whisk together flour, baking powder, soda, salt, and spices in a bowl.

Whisk together sugar, oil, pumpkin, egg, and vanilla in a separate large bowl until well combined, then stir in flour mixture.

Using a 1-ounce ice cream scoop or a 2 tablespoons measuring spoon, drop a scoop's worth of batter onto a lined baking sheet to form 1 mound. This recipe should make at least 32 cookies (or 16 completed sandwiches).  Arrange them 2 inches apart (although they don’t spread out too much).  You should be able to make about 16 cookies per baking sheet.  If there is batter leftover, make more cookies – no one will complain.

Bake until springy to the touch, 12 to 18 minutes. Transfer cookie-cakes to rack to cool.
Form and bake remaining batter on the other parchment-lined sheet.

For filling:
While cookie-cakes are baking, beat cream cheese, butter, and salt in a bowl with an electric mixer until smooth. Add confectioners' sugar and bourbon and mix on low speed until smooth.

Chill filling until firm enough to hold its shape when spread, 30 minutes to 1 hour.


Spread 1 heaping tablespoon of filling each on flat side of half the cooled cookie-cakes, then top with other half of cookie-cakes. If necessary, chill whoopie pies just long enough to firm up filling again, about 30 minutes.