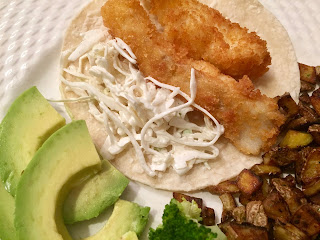 Some women have “a thing” for shoes or purses.  I seem to have “a thing” for cole slaw (Carolina cole slaw; creamy cole slaw; and now for fish tacos).  Not sure how that happened.  I’m not a huge cabbage fan.  My mom used to make cabbage rolls and I peeled off the outer layer and ate the meatball on the inside.  I don’t even make my own cole slaw – the bagged kind is sliced very nicely and does not require me cleaning a food processor.  So how did we get to this place?

Don’t know.  Don’t care.  Because slaw tops barbecue (ask me about David and Travis standing in line for 5 hours at Franklin’s Barbecue in Austin.  And yes, it was worth it. And yes, it ended on an even higher note because they met Aaron Franklin on the way out) or fried fish.  How could that be so wrong?


Place shredded cole slaw in a bowl.  Mix ingredients for aioli in a separate, small bowl.  Add aioli to slaw and mix well.  Top your favorite fish tacos and enjoy.

Email ThisBlogThis!Share to TwitterShare to FacebookShare to Pinterest
Labels: Vegetable