All I can say is that we have teenagers in the house.  I won’t say what or which one but she… 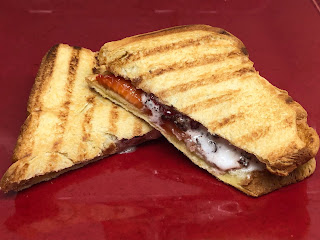 My latest kitchen gadget acquisition is a panini press (mine is a Breville Panini Duo).  Sur La Table was essentially “giving it” to me so I “had” to buy it.  There’s been a lot of panini-ing lately which means  lots of online research for recipes.  My favorite one (so far) has been a dessert panini – which is shocking really.  It’s kind of like a s’more with marshmallow creme and chocolate.  I had you at “marshmallow creme,” admit it.

Heat the panini press while you assemble.

Spread a thin layer of marshmallow crème on one slice of brioche (or the bottom half of a croissant).  Sprinkle chocolate chips on top.  Then layer the strawberry slices.  Place another slice of brioche (or the top half of the croissant).  Set on the panini press and heat until grill marks are made and the chocolate chips have melted.  Flip over and create grill marks on the other side.