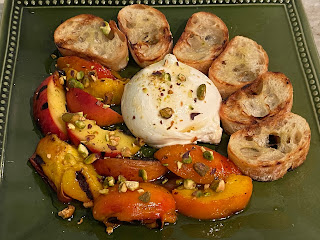 David is such a softy.  Today he went for a run and crossed paths with a large turtle crossing the road.
He had a huge quandary – does he help the turtle cross the road (no, this is not the beginning of a joke) and if so, how?  With his hands? With his foot?  He decides to let the turtle be and figure it out for itself (sounds like his strategy for parenting teens).  As he returns from his run, he is relieved to not find the turtle (or turtle parts) in the place where he first saw it.  But he can’t stop thinking – or talking – about the turtle.  So the experience has been memorialized in this blog post.

It’s summertime and fruit is at its peak.  While peach cobbler is the #1 peach recipe, this one from Two Peas & Their Pod should be a close second.  It’s sweet and creamy and a little salty and it tastes good together spread over a crusty grilled piece of bread. Burrata has become one of our favorite cheeses (if you live in Dallas, go try the burrata salad at Il Bracco – yum!)

For the garlic toasts:

Slice the bread into 3/4″ slices. Gently oil or butter both sides of the bread.

Heat grill over medium-high heat. Place bread slices on the hot grill and cook until grill marks form and the bread slices are lightly toasted, about 2 to 3 minutes. Using tongs, turn the slices over and cook them on the other side until grill marks form, another 2 to 3 minutes. Season with sea salt. Set the bread aside while you grill the peaches.

To grill the peaches. Preheat your grill to medium-high. Brush the cut side of the peach halves with oil and place on the grill for 4 minutes or until grill marks appear and the fruit starts to caramelize. Use a pair of tongs to remove the peaches from the grill. Let the peaches cool for a few minutes or until they are cool enough to handle. Slice the grilled peaches.