For Mother’s Day (yep that was a few weeks ago – does it feel like it?), Travis made me a card which read “Mothers of teens know why some animals eat their young” and attributed it to “Albert Einstein or someone like that”.  There has been a lot of togetherness over the past few months.  It has been a gift to slow down and not rush from one activity to the next and it’s been a test of patience – on everyone’s part – to “appreciate” all of this glorious opportunity.  This cake is something your family will appreciate and you do have to make it the day before so the filling softens the crisp cookies so what a great opportunity to practice your honed skills to the max. 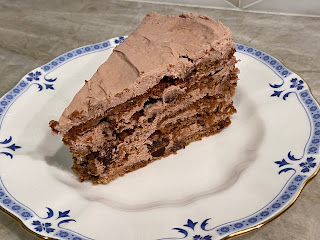 When the temps heat up, the last thing you want to do it heat up your oven.  How about this icebox cake from Barefoot Contessa?  We made some modifications given a lack of interest in espresso powder and kahlua but either way, it’s a winner!


In the bowl of an electric mixer fitted with the whisk attachment, combine the heavy cream, mascarpone, sugar, cocoa powder, and vanilla. Mix on low speed to combine and then slowly raise the speed, until it forms firm peaks.

To assemble the cake, arrange chocolate chip cookies flat in an 8-inch springform pan, covering the bottom as much as possible. It should be 8 cookies per layer (count how many are in each package – multiple by 3 – divide by 5 and that’s how many should be in each layer).  You should have a few extra so you can break some cookies to fill in the spaces. Spread a fifth of the mocha whipped cream evenly over the cookies. Place another layer of cookies on top, lying flat and touching, followed by another fifth of the cream. Continue layering cookies and cream until there are 5 layers of each, ending with a layer of cream. Smooth the top, cover with plastic wrap, and refrigerate overnight.

Run a small sharp knife around the outside of the cake and remove the sides of the pan. If you are feeling fancy, sprinkle the top with shaved semi-sweet chocolate, cut in wedges, and serve cold.


One hour before our weekly grocery pick-up and the dreaded text comes through “We were unable to fulfill fresh iceberg lettuce.”  No!!!  A quick call to the curbside department and an explanation of my first-world problem: “It’s taco salad night.  How can I serve taco salad without lettuce? Is there anything – organic, bagged…”  Tyler understood and said that he’d look into it.  When Andrew and I returned home and started unpacking our bags, Tyler somehow managed to come through.  Thank you Central Market. 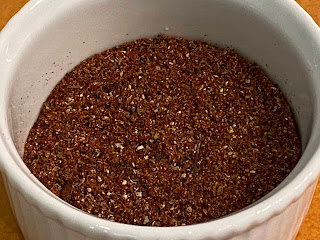 In a small bowl, mix all ingredients together.  Seasoning can be stored in an air tight container.

After browning a pound of ground beef, drain the meat.  Return the meat to the skillet and add 2 tablespoons of the taco seasoning and 2/3 cup of water.  Stir and simmer for 5 minutes.


I have been dreaming a lot recently.  For a few nights, I dreamt about how to cut the boys’ hair.  On the second night, I cut a little too close to Travis’ scalp.  The very next day on television, Anderson Cooper admitted and displayed his hair cutting snafu (and it was eerily similar to my dream).  I also dreamt that I was in a job interview at Microsoft.  It was a panel of 3 interviewers.  They said “we are looking for someone who is organized, detailed, and can keep us on track to meet deadlines.”  To which I replied “that’s me!  I’m the perfect nag – just ask my kids.”  Crickets.  Blank stares.  The silence was deafening.  So I filled the silence by explaining my attempt at a joke.  I could pay a lot of money trying to figure out what any of these mean. 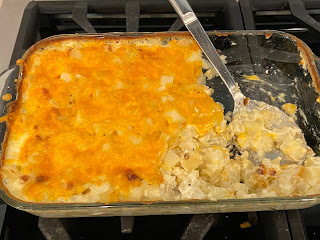 This week’s food delivery included another 15 pound bag of potatoes from Costco and no Tate’s cookies from Tom Thumb so TBM will feature a Ree Drummond au gratin recipe and not an icebox cake.

Combine the cream and milk in a bowl. Add the flour, salt and some pepper. Whisk it together well so that the flour is incorporated into the milk/cream mixture. Add the diced potatoes to the prepared baking dish and pour the creamy mixture all over the top.

Cover the dish with foil and bake for 20 to 30 minutes. Remove the foil and bake 15 to 20 minutes more. Just before serving, sprinkle on the grated cheese and return it to the oven until the cheese is melted and bubbly, 3 to 5 minutes.